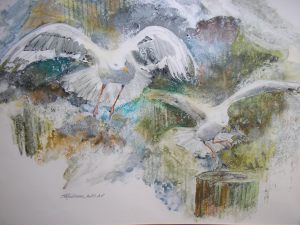 He was born October 3, 1922 to John & Laura (McDonald) Rothermel in Centerville, Indiana.  Dr. Rothermel obtained an undergraduate degree from Earlham College and subsequently earned his M.D at the University of Cincinnati.  After practicing general medicine for ten years in Middletown, Ohio, he did a psychiatric residency at the Medical College of Virginia.  Dr. Rothermel was a psychiatrist in Middletown and then in Sandusky, both privately and at the V.A.  Hal and his late wife, Joan traveled extensively around the world.  He supported her art endeavors, including modernizing the membership information of the American Watercolor Society.  He and Joan were also supporters of the Firelands Symphony Orchestra.  He was a private pilot and enjoyed photography and reading about aviation, science and history.

He was preceded in death by his wife, Joan A. Rothermel in 2012, and his parents.

Private services will be held in Antrim, New Hampshire.

To send flowers to the family or plant a tree in memory of Harold Christian Rothermel, M.D., please visit our floral store.

Video is available for this event