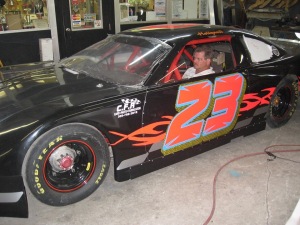 David Paul “Hollywood” Grosswiler, 62, of Sandusky and formerly of Columbus passed away peacefully, Sunday morning May 26, 2019 in the Stein Hospice Care Center Sandusky, following a brief battle with cancer.

He was born May 12, 1957 in Norwalk to Bernard D. and Thaila P. (Shupe) Grosswiler. Dave was a 1975 graduate of Western Reserve High School/EHOVE Vocational School where he was involved in the carpentry program. During high school he played football and wrestled.

Dave retired on his birthday this year as an independent truck driver, where he owned and operated Grosswiler Trucking driving his pride possession named “Bad to the Bone”.   Prior to his retirement, Dave lived in Florida for about twenty years working in demolition as a project estimator for Miami Wrecking, Thunder Demolition and The BG Group. He also was owner/operator of Hollywood Transportation.

His hobbies included fishing, hunting and late model race car driving – car #23. In recent years Dave became quite the gourmet chef while sharing his recipes with all the little ladies at the grocery store!  Anyone who knew Dave knows he was a one of a kind and didn’t know a stranger. He would become instant friends to whoever welcomed his outgoing personality.

He was preceded in death by his parents, his in-laws Lamont and Alice (Holzmiller) Cattano and his canine son, Ducati.

To send flowers to the family or plant a tree in memory of David Paul (Hollywood) Grosswiler, please visit our floral store.